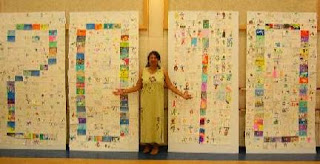 In the spring of 2009, I was hired by the Kerrisdale Community Centre to work with residents to create two thousand and ten postcards.You can see all the postcards here. It was my first paid gig as a community artist. It was also my first paid gig after being a full-time mum for several years.
Many of those postcards were made by students at Kerrisdale Elementary School.
This spring, exactly 10 years later, I'll be returning to Kerrisdale Elementary to do another community art project. This time, I'll be working with the grade 6/7 classes on a weaving project that brings attention to the problem of plastic pollution in the oceans. Thanks to Artstarts in Schools and the Vancouver Biennale Big Ideas in Schools for grants to support this project. 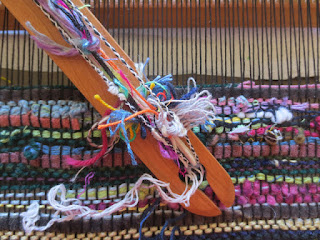 Last summer, my daughter and I had the opportunity to participate in a Vancouver Biennale project related to one of the artworks in their current exhibition. Paradise has Many Gates is a mosque made from chain link fencing. It is currently located at Vanier Park in Vancouver. 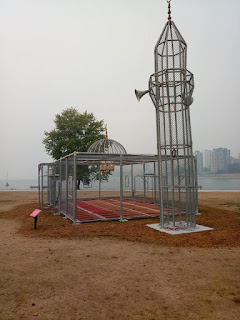 10 textile artists and 5 graphic designers were invited to create textiles in the form of prayer rugs. As part of the project, we had a series of field trips to the Al Salaam Mosque in Burnaby, to the Musqueam Cultural Pavilion, and to the archives of the Museum of Vancouver. The artists were paired with a designer to develop the concept for a rug. Our piece is called "Find What You Need". 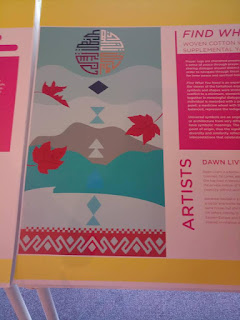 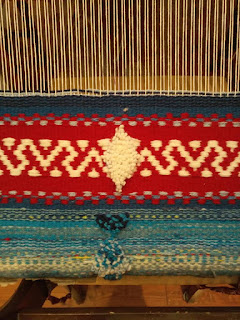 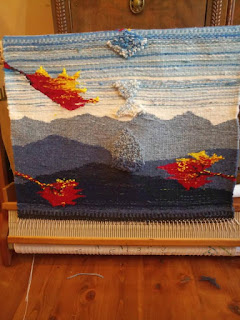 There are many layers of meaning in our rug, including some hidden messages, like the peace sign drawn onto the warp threads under the circle. 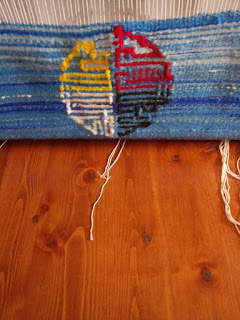 The finished rug.  Viewers are invited to find their own meaning in the piece. 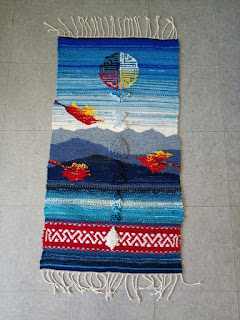 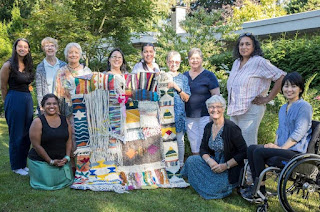 The Weaving Our Way group meets at the Dunbar Community Centre twice a month. This fall many of the weavings that the group has created were exhibited, first at the Richmond City Hall Galleria, then at the UBC Nest, and finally at the Roundhouse community centre. Many of the group members donated a personal weaving that I assembled into a collaborative blanket.

You can see a video about the project here. Many thanks to the Vancouver Arts Colloquium Society for sponsoring this project.
Posted by Misti Ko at 2:27:00 PM No comments: 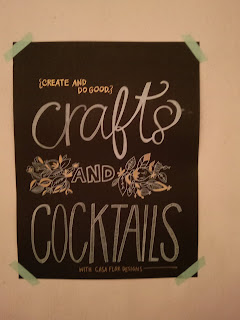 The perfect ending to the trip - an evening of crafts and cocktails courtesy of Casa Flor designs. 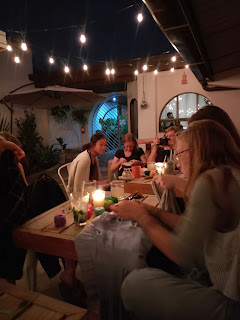 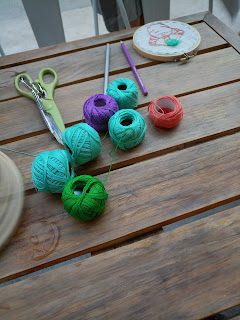 I came home with a bag full of their scrap fabrics that I later stitched together into a little jacket for myself. 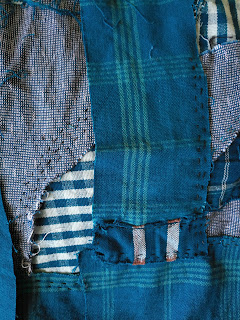 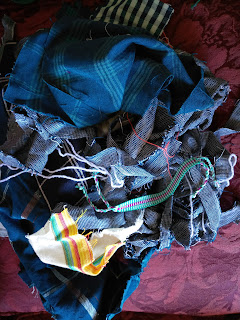 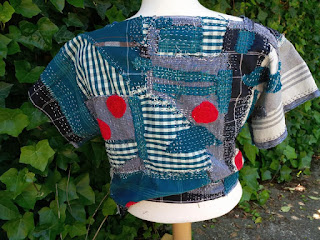 The main reason for my trip to Guatemala in May was to learn about Mayan backstrap weaving techniques. (The trip was organized by Thread Caravan, and I can't say enough good things about them. If you are interested in learning about the Guatemalan Mayan culture and textiles, I would wholeheartly recommend a Thread Caravan trip. They also offer trips to Oaxaca, Mexico and Panama).  We spent two days weaving in San Antonio Palopo with Zenieda and her lovely family. 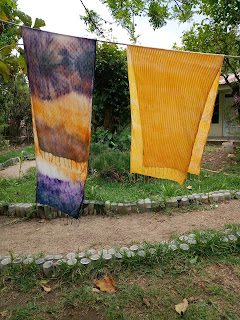 In May, I took a week off from my weaving classes, and snuck away for a quick trip to Guatemala. The trip was organized by Thread Caravan, and I can't say enough good things about them. If you are interested in learning about the Guatemalan Mayan culture and textiles, I would wholeheartly recommend a Thread Caravan trip. They also offer trips to Oaxaca, Mexico and Panama. It really was a wonderful get away - the places we stayed at in Antigua and at Lake Atitlan were both outstanding, but I wasn't just there for fun and relaxation, I wanted to learn about the Mayan textile traditions, and I got LOTS of that too.
We spent a day with the Lema Association in San Juan La Laguna learning about dyieng with local plants. We used "chilka" to get yellow - those would be the leaves in the first photo; they smelled a lot like chamomile but they are from a large leafy shrub like plant). We used"achiote" also known as annatto for orange - this was a paste made from the seeds of a fruit; it is also used as a spice to flavour and colour food. The blue is not indigo, it is called "sacatinta" and is from the wood of a tree. It dyed the cotton yarn that they had a beautiful blue colour, but my scarf came out purple. 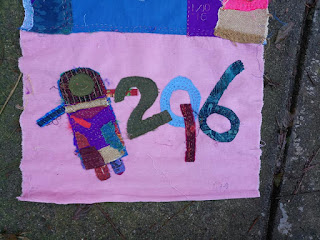 For the past few years, I've been working on a yearly project. In 2015 I made 52 small books - about one each week. In 2016 it was all about fabrics. Weaving, knitting, crochet, dyeing, printing, felting, stitching and embroidery all made an appearance during the year.

I started the year thinking that I would make 52 art dolls, and I started work on the first one, but I was not feeling very inspired until I realized that I had chosen the wrong theme. I actually wanted to spend the year working with fabrics in different ways. When I made the decision to change my plans, the ideas just started to tumble out of my head. The first piece that I stitched includes the art doll that I had started - it's just flat rather than stuffed. The powder pink background fabric is some corduroy that I've had since the 1980s. Yes really - it was originally a skirt that I used to wear back in the day when pastels were all the rage. I cut it into a pair of baby pants that my kids wore when they were little. I hadn't anticipated how many memories would work their way into this project, but I love all the bits of nostalgia that got stitched into this project. 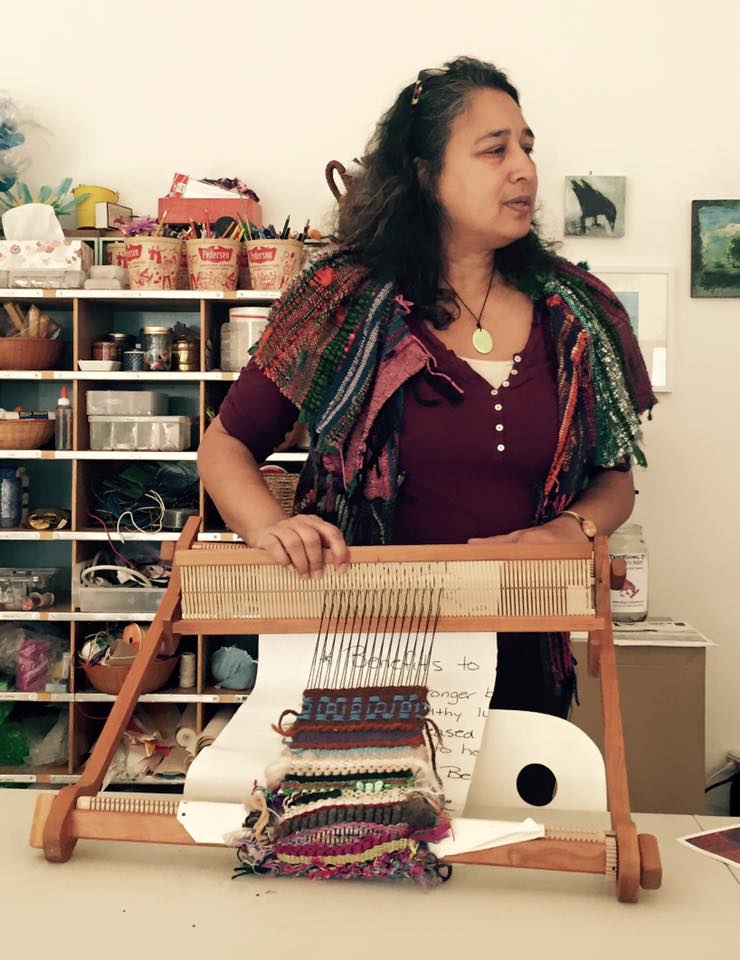